They’d love nothing more than to become a household name, with photos of their premises splashed online and people flocking to find out more about them.

Every now and then, this happens to a business organically [pun intended]. And so it happened for the Four Seasons Total Landscaping when it became the unwitting venue for a Trump team press conference.

.@Chrislhayes on the Four Seasons Total Landscaping press conference: “At one level all this stuff is hilarious, but at another there’s a reason the president’s casinos went bankrupt and he’s overseen one of the worst coronavirus responses,” https://t.co/XL6xAQrvxE

Recently, PR practitioners on Twitter were asked: “If you were handling PR for Four Seasons Total Landscaping, what would your next move be?”

This elicited a variety of responses, with some PR pros recommending pitching to the White House for new (lawn) business, sending a note of explanation to their customers, or even changing their name!

From what I’ve seen, Four Seasons Total Landscaping has already done a good PR job itself. I’m not sure if they hired fresh PR counsel when they hit the spotlight, but I think the following tactics have worked well for them: 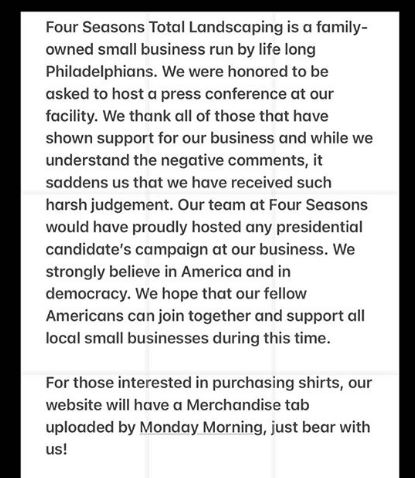 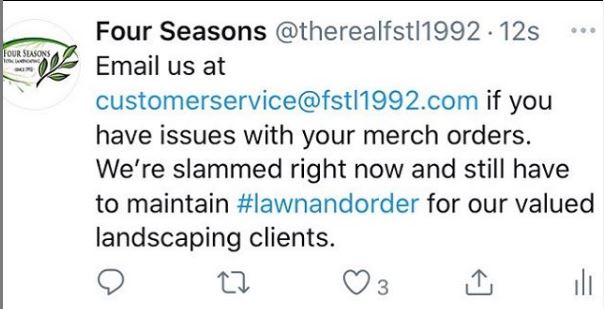 The story of Four Seasons Total Landscaping – with thanks @jeremyrroebuck and colleagues at @PhillyInquirer, plus @washingtonpost. And@_RichardHall who was there. pic.twitter.com/h7QaSx3dv4

And when you’re head down, doing that kind of work for loyal customers, the communications and branding stuff is often (sadly) left behind.

And by the way (to use a favourite linking-phrase of President Elect Joe Biden), did you notice Biden give a nod to the business in his speech? He said: